Skip to content
Biggest Online Casino Winners In The UK

While some people are skeptical as to how much money one could win at an online casino, others have experienced it firsthand. One UK based player, Neil, had the kind of beginner’s luck most players only dream of. Upon joining an online casino, Neil made a deposit and started with a £4 bet on Hall of Gods. It netted him his first online casino win of £6.3 million. Neil reportedly wanted to spread the wealth, intending to buy a vacation home for his parents, travel to Australia to see his sister and last but not least, show his children the magic of Disney World by taking a holiday there. He also reportedly donated an undisclosed amount to a cancer research charity.

Neil wasn’t the only one to benefit from Hall of Gods, as a 37 year old male UK player took to his mobile device to try his luck. By placing a bet for £10, he won a jackpot worth £6,719,561.71. In addition, a man named Jari made €0.40 bets, which led to winning a €101,560 jackpot. Jari reportedly decided to use his winnings to embark on travel and was considering purchasing a motorcycle as well.

The same casino that made Neil a winner also made another player’s day. Known to the media simply as Dennis, he spent hours playing Divine Fortune and eventually had a bankroll of only £4. Dennis used £2 of that £4 on a single spin of the reels and walked away with £65,826. Dennis reportedly bought a car with his winnings as well as rewarded his children with a significant amount of money. He also took his wife on vacation and even renovated his house using his winnings.

Divine Fortune was also generous to an undisclosed player who won his jackpot on April Fools’ Day 2018. Having made a €22 deposit into his casino account, the man only bet €0.40 per spin. 20 minutes into playing the game he won a jackpot worth €175,600.

An anonymous player tried his luck on the Top Cat slot machine and won a jackpot of £100,015.17. Afterwards, he kept quiet about the ways in which he spent the money. Also remaining anonymous was a player who hit it big on the Reactoonz slot machine. The jackpot he won was reportedly worth more than £1 million. As a high roller, the player was able to place an £80 bet, the largest wagering amount the game allows per spin. Due to his status as a high roller and his £100,000 bankroll, the casino’s VIP manager raised his wagering amount maximum to £400.

These are some of the UK’s biggest online casino winners from 2017 to 2018. Each story proves that spinning the reels of a slot machine can be much more profitable than most players realize. The top online casinos and games that payout life changing amounts to lucky winners are ones that are enjoying a great deal of success all over the world. 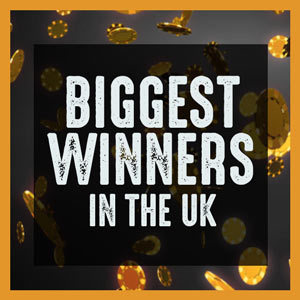